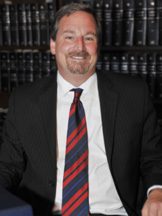 Mr. Bagula has seventeen years of litigation experience. Mr. Bagula has obtained favorable results in all types of cases, some of which include:

Mr. Bagula is admitted in all California Courts, and before the Southern, Central, and Eastern Federal District Courts of California. In addition to briefing an appeal before the Ninth Circuit Court of Appeals, he has briefed and orally argued appellate cases before both the Second Circuit and Fourth Circuit Courts of Appeal. Mr. Bagula has appeared in the courts of other states with the sponsoring of local counsel, such as: Vermont, Massachusetts, Texas, Nevada, Arizona, South Carolina, Washington, and Colorado.

In addition to his legal practice, Mr. Bagula is active in the legal community. Mr. Bagula is a member of the San Diego County Bar Association and serves as a Trustee on the San Diego County Law Library Justice Foundation. He is likewise active in various social organizations. Mr. Bagula previously served as President of the Democratic Professional Club, and the Mission Valley Rotary Club. He is currently Vice-President of Understanding Climate Change, a non-profit organization, which works with Scripps Institute scientists to educate the local community about climate change.